On the attitude towards fever, from a psychological, sociological point of view

In this article, we explore the complex issue of the psychological and sociological background of fever, and more specifically the nature of negative attitudes towards fever.

We’ll be asking why many parents and health professionals supress fever when it isn’t absolutely necessary. Why does an adult take it so hard when a child is feverish? Why does the adult himself have difficulty with febrile conditions?

Negative attitudes towards fever are determined by two basic drivers: on the one hand, people’s fear of fever, and on the other hand, people’s pursuit of comfort and convenience.

What is fear: stroke of fate, or opportunity?

In recent centuries, humanity has made unprecedented efforts to eliminate all possible sources of fear in us humans. Modern medicine, an advanced legal system, systematic sacrifices to repress epidemics, and countless other achievements strive to provide us with a safe, fear-free world. It seems that we have everything we need to help the “rationally thinking person” encounter fear less and less often, and feel more and more safe.

However, it seems that especially this rational-minded person – the operator, creator and judge – of the modern world, remains scared despite all these developments for their security. This is supported by data from developed consumer societies of increasing cases of anxiety disorders. Fritz Riemann, a well-known researcher of fear, described the above phenomenon as follows:

“It seems that we have a new affliction in our lives today: we learn of more and more kinds of anxiety that result from our own actions, and that these actions turn against ourselves. We know the anxiety from the destructive forces within us - that result from interventions in natural life processes. The wanting of power, which lacks love and humility, the wanting of power over nature and life, creates in us the fear of becoming a manipulated beings with an empty soul. If the man of older times feared the forces of nature to which he was helplessly exposed, and feared the threatening demons, the vengeful gods, then we must now fear ourselves.”

However, he who is afraid of himself is practically cutting himself off from his own internal resources. There is no other way to resolve this situation, but the sincere confrontation with ourselves, our fears, the stages of the life path where this condition developed and was fixed. There is no other way, since what motivates the constant avoidance of fear – is fear itself.

Fear is typically understood as a lack of a sense of security or self-confidence, but definitely a lack of completeness, of health. Fear is a additional source of energy that helps and alerts until the skills needed to resolve a situation are developed or required. Degrees and variations of fear are decisive in terms of their effect: as long as fear is accompanied by curiosity and the excitement of discovery, we are dealing with a positive driving force (eustress). Such is the excitement of stage fright, which can spur a better performance. The situation is different with stronger degrees of fear (distress): a dread that causes paralysis, or a panic that results in severe physical symptoms, or phobia.

In the case of fear, we are consciousness, at least on some level, of the causes for it, even if in many cases we have obscured the real causes behind. In the case of anxiety, we are not even aware to that fear. An indefinite presentiment seemingly without reason is called anxiety.

These are energies that appear in certain situations in our lives and are used voluntarily, unintentionally, or we are simply submerged in their power. They are forces that every person must face in their life, and must learn to live with, to accept as a driving force and a facilitator for their development. From the straining powers of fear are initially born the desire, then the will, and finally the action of transforming that fear into healthy harmony. And this provides an opportunity to achieve wholeness, to become creative, wise and loving people.

The social presence of fear associated with fever

Long before the advent of modern medicine, the most striking symptom of illness, fever, was believed to be the cause of illness and possible death. Thus, fever and fever-inducing diseases were still indistinguishable, high fever (in the absence of appropriate treatment) was identified as a serious disease. Furthermore, the decrease and cessation of fever is a sign of healing, so due to the fear of fever the need for fever alleviation has developed in society.

By the early 1980s, medical knowledge about fever had fundamentally changed. Its beneficial physiological role in the immune response to infections has been proven and has become generally accepted. It has become increasingly apparent in recent decades that fever up to 40-41 °C does not cause clinically evaluable damage. Spontaneously fever does not rise spontaneously above 41.7 °C, and its suppression does not prevent febrile convulsions.

Countries around the world have responded in different ways and at different rates to changes in knowledge about fever. In the Netherlands, for example, immediate action was taken and, in 10 years, modern fever control principles were adopted, and the population's behavioural responses to fever has changed radically. In contrast, in Australia and the United States, the fight against fever phobia is still going on with considerable force, and almost nothing has changed in much of the world.

Fear and antipyretic habits can be found to this day and affect the attitudes and habits of health care workers and lay people about fever. Unfounded fear of fever, i.e. fever phobia, is a worldwide phenomenon and has been known for nearly 40 years. The misconceptions about fever and the resulting patterns of behaviour can be considered persistent at the societal level, in which both professionals and the media play a significant role. In Western societies, 3 groups of attitudes towards fever have emerged:

1) Those who find the fever useful, accept it and accompany it supportively.

2) Those who are open, curious and seek support, encouragement.

3) Those who reject the above thoughts because their attitude is determined by fear or the pursuit of comfort.

The evolutionary-biological root of fears associated with fever

During a febrile state, not only the negative beliefs and social-level phobias that were ingrained in our culture over the centuries lead to irrational perception, but also the parental or caring instinct, ie. the fear that sustains the human race. The caregiver learnt to instinctively and and intensely monitor a child’s symptoms (Figure 1).

These symptoms evoke certain thoughts and feelings in caregivers. Figure 2 shows what thoughts and actions the child's condition and life phenomena evoke and the typical responses. This is because thoughts (mental patterns), feelings, and actual ability to act are closely related. 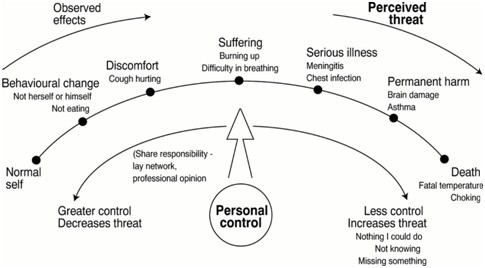 With the onset of symptoms, the parent will first be attentive and then anxious. Whilst a child’s body is working to regain his state of equilibrium, they are not eating, barely drinking, barely moving (as he normally does during play), and is in a different state of consciousness, uninterested in their environment. So, the adult around him may begin to worry. This concern gradually leads to stress, anxiety, and eventually a panic for fear of death. “Panic” reactions are characterized by “presupposition” (anticipation), which shows up as fear and also as an urge to avoid or over-control the situation. In this “panic state,” it is enough to utter the words “danger,” “complication,” “severe,” and an unconscious, internal reaction is kicked off, resulting in unreasonable fever suppression.

Uncertainty – when the outcome of a situation can only be partially assessed– leads to a sense of danger and anxiety. If a demanding situation can be assessed, it can be dealt with better than a less severe but still uncertain situation. It is therefore important for the caregiver to find a more objective view of the situation. The FeverFriend telephone application serves to enable parents to assess the real significance of symptoms and signs of illness.

Adapting to a potentially dangerous situation

In order for a caregiver to be able to judge a potentially dangerous situation as objectively as possible, he or she must adapt flexibly and effectively to the situation. According to Lazarus’ model, an event that exceeds our current resources (e.g., the first child’s first high fever) can result in stress and a negative coping pattern. Therefore, is it worth evaluating such an event in retrospect: was the situation a real threat or just a challenge? Were there sufficient resources to deal with the situation, and what form of coping is most appropriate for the future? Finally, are you satisfied with the result?

According to Antonovsky, difficult life situations, such as those aimed at maintaining health, can be solved as successfully as possible if the following 3 points are met at the same time, because then the feeling of coherence is fulfilled:

Fear, as we have seen, is not to be underestimated, not is it an adversary. It can be a friend and helper if we know and respect its laws. However, if we ignore it, it can overwhelm us and become our ruler. You have to get past the “fight or flight” reflexes it pushes, but you also have to pay attention to what it wants to show you.

In addition to fear, the other determining factor related to fever is the pursuit of comfort, which can be recognized in sentences like the following:

"He can't rest, sleep." "The poor thing is suffering." "He is so very fussy." "It's hard to watch her being tormented." "There is no time for her to have a fever for days." "Let's not torture the child." "I can't stand it if he suffers." "I can't stand the inconvenience."

Often we see that the child is tolerating their febrile condition much better than the caring parent or grandparent. So it often happens that the parent treats the child for their own reassurance – which is unjustifiable.

Do not give medicine to anyone out of "regret", excessive sparing, because:

It is important to know that during a febrile illness, the child temporarily - very usefully - rearranges his / her resources and life processes. His sleep e.g. evening will be more superficial, restless, because then the fever will rise, you will perform "the brigade of work." During the day, he brings it in with reduced activity, lying in bed. He does not want to drink when the fever rises, he becomes thirsty after the fever has culminated and sweats. The same is true with eating. “Physiological loss of appetite” is a normal part of fever. The child is temporarily using the reserves. It brings it up as the disease subsides.

Improve your well-being while maintaining the benefits of fever. Like an athlete who is just training, just fighting. To do this, see the chapter on "Supportive care you can offer during fever".

Wish you and your child a good workout with fever!